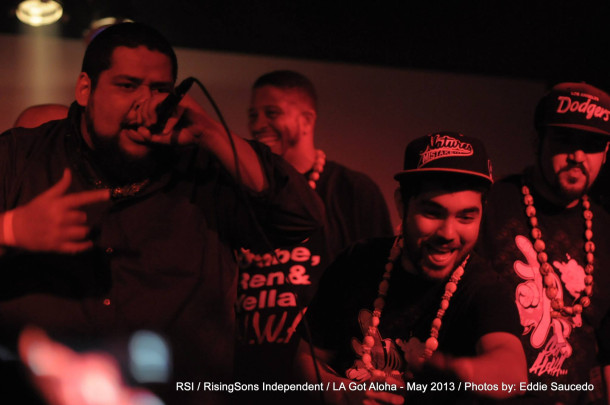 A lot of people go out on a Friday night trying to get laid.  Nothing extraordinary about that.  Or you could find yourself getting lei’d by a pretty hula girl at one of the semi-annual LA Got Aloha events established by RisingSons Independent.

The bar at the Dragonfly was open to those in attendance and there was no shortage of stimuli to captivate attendees and performers alike, from live painting to D.J.s spinning inside and outside while those in attendance could walk around, drink of choice in hand, and peruse the live art and various other artistic displays. Beer pong was an awesome option for those who like to get their alcohol game on making this unique show feel like the big fun party that it is.

The underground hip-hop-art-show hybrid, the first of 2013, was headlined by Chali 2na, who found himself returning to his old stomping grounds to put on a set that drew everyone at the Dragonfly that night to crowd the stage and enjoy some awe-inspiring rap skills.  Not one to lack of talent, his paintings were also on display at the event.

Not unlike the L.A. Got Aloha shows preceding, this event was not a disappointment.   However, after years of gaining momentum, anyone in attendance could tell you that this show stood above the rest; it was something you could just feel in the crowd and sense from the various artists who helped make this show what it was.  What RisingSons Independent will continue to do with these shows inspires excitement and anticipation.  If you’re unfortunate enough to find yourself not knowing what to do on a Friday night, hopefully there’s an L.A. Got Aloha event going on at the Dragonfly and you can go show some Aloha and get lei’d in the best way possible.

Much Aloha to the Sponsors: